By lwright August 19, 2019 Uncategorized
No Comments

Emergencies are never fun to think about, but it’s always best to be prepared. The following are examples of common emergencies: 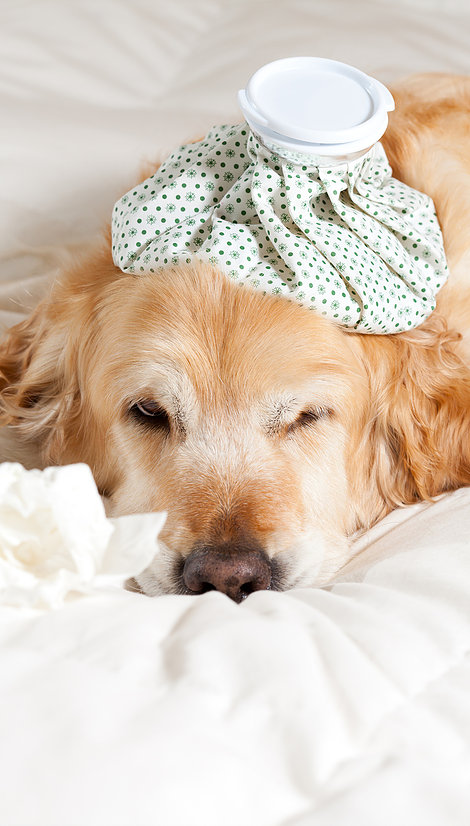 The bottom line is that ANY concern about your pet’s health warrants, at minimum, a call to your veterinarian. Your veterinary team will advise you to the urgency of your pet’s need, and direct you to the closest emergency care facility that is best suited to care for your pets current requirements.

Does Your Dog Have an Appetite for Life? Dogs are naturally curious, but sometimes their curiosity gets the best of them. This is especially true for dogs with mouths like vacuum cleaners – they tend to eat a lot of strange things. As connoisseurs of life, many dogs don’t hesitate to sample all sorts of objects from toilet paper to rocks, shoes to sticks, clothing, and even garbage. While many of these things somehow pass through the intestinal tract without incident – and at a dog-owner’s dismay – sometimes a dog’s appetite for life can cause problems.

Did Your Cat Eat Something Weird? Like dogs, cats are naturally curious. But sometimes their curiosity gets the best of them, and this is especially true when cats eat strange things. As connoisseurs of life, many cats don’t hesitate to sample all sorts of objects from toilet paper to thread, clothing, and even rodents and insects. While many of these things are able to pass through the intestinal tract without incident, sometimes a cat’s appetite for life can cause problems.
Bloat or Stomach Dilatation in Dogs | petMD

Gastric dilation and volvulus syndrome (GDV), more commonly referred to as gastric torsion or bloat, is a disease in dogs in which the animal’s stomach dilates and then rotates, or twists, around its short axis. A number of emergency conditions may result as a consequence of this gastric rotation, including progressive distension of the stomach, increased pressure within the abdomen, damage to the cardiovascular system, and decreased perfusion. Perfusion is the process of delivering nutrients via blood in the arteries to the body’s tissues. Insufficient perfusion may lead to cellular damage and even organ death.
Cushing’s Disease in Dogs | petMD

The endocrine system is the collective system of glands that produce and secrete hormones in the body, one of which is the hormone cortisol. At normal levels, cortisol performs many useful functions, including helping individuals respond to stress and modulating the immune system, but too much cortisol in the body can do a lot of damage.

The condition associated with an excess of cortisol is medically referred to as hyperadrenocorticism, or Cushing’s disease, and it is one of the most common endocrine disorders that affects dogs.

Cushing’s disease in dogs develops when their own body overproduces cortisol. Hyperadrenocorticism in dogs generally affects middle-aged to older animals. At any age, taking high levels of steroid dog medications or taking these medications for a long time can cause the same symptoms. 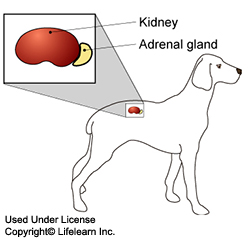 Addison’s disease in the dog is primarily caused by an immune –mediated destruction of adrenal tissue. Less commonly, the adrenal glands may be damaged by trauma or infection. Addison’s disease can also occur following treatment of Cushing’s disease (hyperadrenocorticism), in which too much cortisol and aldosterone are produced. If the medication used to treat Cushing’s disease inadvertently suppresses too much adrenal gland activity, deficiency of cortisol and aldosterone may result.

A secondary form of Addison’s disease can result from a tumor or defect in the pituitary gland, which is an important hormonal regulator located in the brain. Secondary Addison’s disease can also develop if a dog has been treated with long-term steroids for any reason and the medication is abruptly stopped. This last condition is known as iatrogenic hypoadrenocorticism and is generally temporary.

Certain breeds seem to be at increased risk for developing Addison’s disease. These include, but are not limited to: Portuguese water dog, bearded collie, standard poodles, Nova Scotia duck tolling retrievers, Leonbergers, and Labrador retrievers. 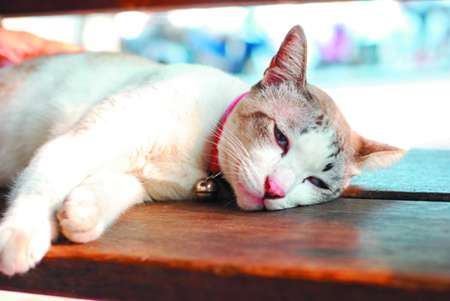 Think Addison’s is just a dog disease? Not so fast—while it’s uncommon relative to the incidence in dogs, cats can have primary hypoadrenocorticism too. The disease tends to affect middle-aged cats but can show up in felines anywhere from 1.5 to 14 years of age. No sex or breed seems to be affected more than another.