By Admin April 25, 2019 Uncategorized
No Comments

Though they have been with us through the winter, spring sees a resurgence of flea populations as they look for their meals when the temperatures rise. Eggs previously dormant start to hatch, and infestations can happen in a very short period of time. If your pet is not currently on prevention, now is the time to start! Talk to us today about selecting the best product to keep your pets safe and happy.

There’s How Many Types Of Fleas?! 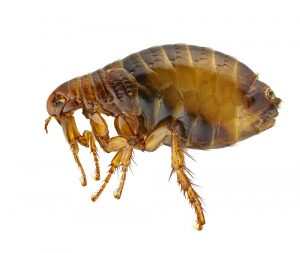 Fleas are very small, wingless, laterally flattened insects of the order Siphonaptera. They’re best known for being external parasites on mammals and occasionally birds. Adult fleas live in the fur or feathers of their hosts, feeding on their blood to survive and reproduce. While fleas do feed off humans, more common host animals include rodents, dogs and cats. The “human” flea, Pulex irritans, actually attacks a broad range of mammal species, and the same is true of most flea species that bite humans. About 2,000 species and subspecies are known worldwide, with at least 127 found in Canada, most of them in British Columbia and Alberta. Read more HERE 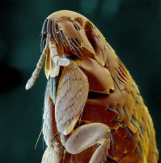 Unfortunately, fleas exist almost everywhere. It’s not surprising that you and your dog might run into fleas at dog parks or on the trail. But your dog can easily pick up a flea while taking a “break” in your backyard or walking alongside a neighborhood sidewalk.

Seeing a flea on your clean, well-cared for cat can be a horrifying experience. In addition to the major “ick” factor fleas bring, they can bite your cat, causing pain and leading to health issues.

Keep in mind that you might not actually see fleas on your cat because they’re hiding deep in the fur. What’s more, cats may swallow fleas through everyday grooming. So unless your cat is heavily infested with fleas, you may see little or no evidence of the small fleas that can cause these potentially big problems.

Many dogs & cats suffer from flea allergy dermatitis (FAD), an allergic condition caused by flea bites. In fact, it’s one of the most common reasons pet owners take their dogs to the veterinarian.

While chewing at irritated skin from flea bites or even while licking a leg to remove dirt, dogs can swallow fleas. Similarly cats will ingest fleas while grooming. If those ingested fleas happen to be infected with tapeworms, there is a good chance your dog or cat will become infected.

While thought to be a concern only for cats, there’s increasing evidence that dogs too can be infected with a bacteria called bartonella. While the source of infection is not as clear cut as in the cat, infection with the bartonella bacteria in dogs has been linked to fleas.

Thinking about just one flea being on your pet is terrible, let alone thinking about hundreds. But that’s just what happens if your pet ever has the unlucky experience of being infested with fleas. If a large number of fleas bite and take blood meals (yes, fleas drink your pet’s blood), your pet can develop anemia. This is a serious medical condition, especially in puppies & kittens, that must be promptly addressed through veterinary care. Symptoms include weakness, lethargy, rapid breathing and, potentially, death if the fleas are not killed. With severe infestations, we suggest treating the home and surrounding outdoor areas, as well as treating the pet for fleas.

How to help prevent fleas on dogs

Fleas can be just about anywhere, making it practically impossible to avoid them. Therefore, it is important to routinely treat your pet with an effective flea preventive. 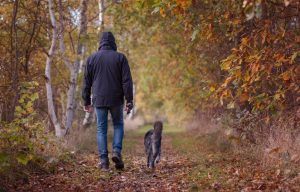 A tapeworm that can infect dogs and humans and lead to potentially fatal illness is now widespread in southern Ontario, new work by Ontario Veterinary College (OVC) researchers at the University of Guelph has revealed. The researchers found the Echinococcus multilocularis tapeworm in nearly one in four coyotes and foxes they tested in southern Ontario, suggesting the potentially dangerous parasite is now well established in the region.

A risk to both pets and their owners, prevention is key. Consider treating your dog with a monthly heartworm preventative, that also includes a label claim to treat and control Echinococcus multilocularis (such as Interceptor Plus).

How do people get alveolar echinococcosis (AE)?
People who accidentally swallow the eggs of the Echinococcus multilocularis tapeworm are at risk for infection. People at high risk include trappers, hunters, veterinarians, or others who have contact with wild foxes, or coyotes, or their stool, or household dogs and cats that have the opportunity to eat wild rodents infected with AE. Humans can be exposed to these eggs by “hand-to-mouth” transfer or contamination.

By directly ingesting food items contaminated with stool from foxes or coyotes. This might include grass, herbs, greens, or berries gathered from fields.
By petting or handling household dogs or cats infected with the Echinococcus multilocularistape worm. These pets may shed the tapeworm eggs in their stool, and their fur may be contaminated. Some dogs “scent roll” in foreign material (such as wild animal feces) and may become contaminated this way.
In humans, AE progresses slowly over several years and causes tumour-like lesions in the body, usually in the liver. Treatment can be complicated and expensive, typically requiring surgery and drug therapy. If left untreated, AE will spread to other organs and eventually become fatal.

The most well-known flea transmitted disease is the Bubonic plague. In the 14th century, the bubonic plague (known as the “Black Death”) became an epidemic and killed 25 million people – up to 50% of the European population.

This is a rare disease in North America, but a few cases of Murine Typhus are reported each year and mostly originating in southwestern states. This disease occurs in rat-infested areas, where fleas become infected by rats.

This disease is rarely diagnosed in North America but due to international travel originating from tropical regions, like the West Indies, Caribbean, and Central America, where it is indigenous, it is worth knowing about this illness.

Tularemia is a potentially serious illness that occurs naturally in North America. It is caused by the bacterium Francisella tularensis and found in animals like rodents. It can be transferred to humans by an infected flea or tick bite.

Flea saliva can cause skin dermatitis in humans, which usually appears on patches of skin as itchy bumps or a rash.

Fleas are known to transmit parasites, such as tapeworm, which primarily affect pets. Adult fleas infected with tapeworm may be accidentally ingested by cats or dogs during grooming.

Your local veterinarian will be able to treat your animal for tapeworms and fleas.