Cat Vomiting: Types, Causes and Treatments, And A Look At Common Cancers 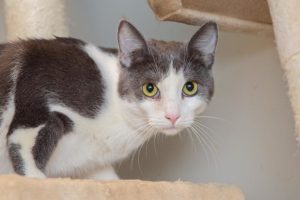 If you have cats, you’ve probably seen one of them throw up at one time or another. It is common for cats to vomit, but it’s never normal for them to do so. With that said, it is also not always something that has to be treated, nor does the cat need to be rushed to a veterinarian every time she vomits. In this resource, you’ll get the scoop on when to take a vomiting cat to the vet, why cats vomit and what treatments are available to help felines feel better.

Chronic and acute vomiting in cats

Throwing up can be separated into two broad categories: chronic and acute vomiting. Chronic vomiting means throwing up with some regularity (at least monthly, but it can be daily) for a long period of time. The cat usually only vomits once or twice with each occurrence. When a cat who usually doesn’t vomit starts vomiting, that’s the acute type. This is generally a concern for you and your veterinarian only if the cat vomits multiple times. The diagnostic workup and treatments for acute and chronic vomiting can differ, as does the urgency of when to bring the cat to the veterinarian.

While lymphoma cannot be prevented, …, the chances that a cat will develop the disease may be reduced through vaccination against FeLV, by preventing contact with FIV or FeLV infected cats, and by making sure it does not live in an environment contaminated by tobacco smoke. Since early detection of the disease may improve an animal’s chances for survival, Dr. McEntee also recommends that all cats seven years of age and older undergo twice-yearly physical examinations that include blood chemistry testing and thorough palpation of the patient’s body.

Lymphoma is a cancer of a specific white blood cell called the lymphocyte.  Lymphocytes are the major cells found in lymph nodes.  The lymph system is found in blood and tissues throughout the body; it is a network of vessels and nodes through which foreign proteins and disease organisms are circulated. Lymphocytes have a number of roles in the immune system, including the production of antibodies and other substances that fight infection and disease.

With lymphoma the cancer cells invade and destroy normal tissues. In cats, lymphoma cells (like lymphocytes) can grow anywhere in the body, but there are certain sites that are more commonly affected by lymphoma than others (such as the GI tract, mediastinum, and lymph nodes). As the disease progresses, lymphoma can affect other organs in the body. Signs of general malaise (i. e. lethargy, decreased appetite, vomiting, and diarrhea) progress and ultimately results in death. 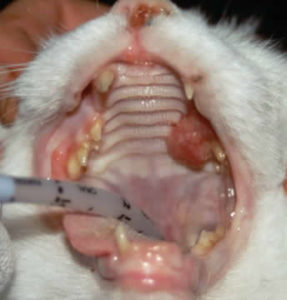 WHAT IS ORAL SQUAMOUS CELL CARCINOMA?

Oral squamous cell carcinoma is cancer of the lining of the oral cavity, including the gingiva (gums), tongue, palate and tonsils. It is the most common oral cancer in cats. Tumors are locally invasive and can extend into the bones of the upper or lower jaw. The rate of metastasis at the time of diagnosis is low. The most common sites of metastasis are lymph nodes of the head and neck and the lungs.

WHAT ARE THE CLINICAL SIGNS?

The first signs of an oral tumor are often perceived as decreased or absent appetite and weight loss. However, cats are reluctant to eat because the tumor is painful, not because they aren’t hungry. They may approach their food bowl and attempt to eat, but only sniff at the food and not ingest it. You may note blood-tinged saliva around their mouth, blood in the food/water bowl, or along your cat’s front paws. Your cat may show decreased grooming, have a foul odor to their breath, or show signs of facial or jaw swelling. Tumors are not always visible on an awake exam and painful cats will not permit their owners or veterinarians to get a good look in their mouths.

These signs often prompt veterinarians to recommend a dental cleaning, assuming “bad teeth” as the cause of signs. Tumors are more likely to be seen during a dental because cleanings are done under general anesthesia and your veterinarian can have a much better look in your cat’s mouth.

Unfortunately, most cats do not show any outward signs until the tumor is too large to be treated and owners have no way of knowing their cat has this disease. 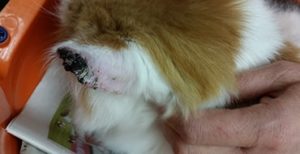 During your cat’s routine physical exam, you’re likely to observe the veterinarian carefully studying the animal’s face, gently stroking its nose, and fondling its ears. This is not merely a show of affection. Rather, the veterinarian is searching for tiny, scabby sores on the cat’s skin that could indicate the presence of squamous cell carcinoma (SCC) — a skin cancer that, if caught in its early stage, will most likely be harmless and easily treated. If the skin eruptions go unnoticed, however, the cancer can progress, spread to other parts of the body, and ultimately prove fatal.

Squamous cells are the flat, irregularly shaped, scale-like cells that constitute the outer layer of the epithelium, the tissue that lines the external and internal surfaces of the organs in a cat’s body. The chief functions of these unique cells range from the protection of underlying tissue to the facilitation of nutrient exchange. According to Margaret McEntee, DVM, an associate professor of oncology at Cornell University’s College of Veterinary Medicine, skin tumors in general are the second most common type of feline cancer diagnosed at the Cornell University Hospital for Animals, exceeded only by lymphoma. And among skin cancers, SCC ranks fourth — after basal cell tumors, mast cell cancer and fibrosarcoma.